Has King David’s Palace Been Found? 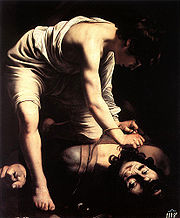 Caravaggio: David and Goliath (ca. 1599). Some sceptics assumed that King David was a legendary figure. Image courtesy of Wikipedia.

Some sceptics thought that King David never existed. Some others assumed that he was a tribal chief and that the accounts about him in the Old Testament were greatly exaggerated.

However, this week the Israel Antiquities Authority issued a press release that claims that King David’s palace was discovered. It stated:

“Two royal public buildings, the likes of which have not previously been found in the Kingdom of Judah of the tenth century BCE, were uncovered this past year by researchers of the Hebrew University and the Israel Antiquities Authority at Khirbet Qeiyafa – a fortified city in Judah dating to the time of King David and identified with the biblical city of Shaarayim.

One of the buildings is identified by the researchers, Professor Yossi Garfinkel of the Hebrew University and Saar Ganor of the Israel Antiquities Authority, as David’s palace, and the other structure served as an enormous royal storeroom.”

Khirbet Qeiyafa is not far (about 30 kilometres) from Jerusalem. The discovery suggests that Israel was a well-developed state in the 10th century B.C.

While we cannot be absolutely sure that the find is really David’s palace, it seems to be a very logical explanation of the facts.

Interesting? Yes, but we should not forget that the Bible describes real people, who lived in real geographic locations at real eras in history.