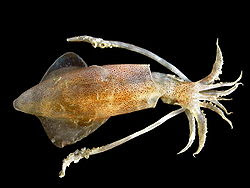 Image of a modern-day squid courtesy of Hans Hillewaert, Wikipedia.


Proponents of Darwinian evolution often define evolution as change over time. There are, of course, several other definitions, but without change evolution would be in deep trouble.

It often is. Recently, research published in the journal Proceedings of the National Academy of Sciences on ink assumed to hail from the Jurassic Era added to the long list of evolutionary stasis or no change.

“An ink sac from a 160-million-year-old giant cephalopod fossil contains the pigment melanin; it is essentially identical to the melanin found in the ink sac of a modern-day cuttlefish.”

It would be fair to say that living fossils and a general lack of gradual Darwinian changes are big problems for evolution.