Journal Wants to Banish the Word Design from Biology 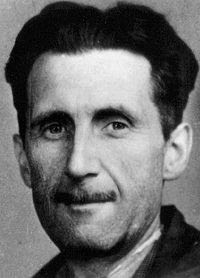 The father of newspeak. Image courtesy of Wikipedia. An evolution journal wants scientists to use Orwellian language.

Darwinians are obviously frustrated with their inability to make both scientists and laypeople understand evolution in the way they wish. The editorial of a recent issue of the journal BioEssays encourages scientists to embrace a method made popular by George Orwell: one should use words that mean something very different from what one might assume.

The problem has to do with teleology. Science journals often use words that indicate a purpose or goal. Moore says that even our old friend Richard Dawkins erred in suggesting that the watchmaker is blind. According to Moore, even a blind watchmaker is a watchmaker, so Dawkins actually promoted the view that biological systems have been designed.

Expressions such as ”how nature solved this problem (X)” are also banned in Darwinian orthodoxy. The proper way to say it is: ”How evolution resulted in.”

The basic problem evolutionists are facing is that practically all biological systems look as though they are designed. Denying this obvious fact has been a hard nut to crack for Darwinists.

Writing to the church in Rome, the apostle Paul said: ” For since the creation of the world God’s invisible qualities—his eternal power and divine nature—have been clearly seen, being understood from what has been made, so that people are without excuse.”