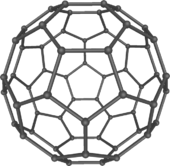 The latest issue of Creation magazine has an excellent article on professor Richard Errett Smalley, the co-discoverer of fullerene.

For most of his life Smalley (1943 – 2005) was a skeptic. He accepted Darwinian evolution at an early age and was critical of religion.

Smalley obtained a PhD at Princeton University in 1973 and was a professor of chemistry, physics and astronomy at Rice University. In 1996 he was awarded the Nobel Prize in Chemistry (together with Harold Kroto and Robert Curl) for discovering fullerene.

Fullerene, commonly called a buckyball, is a soccer-ball shaped allotrope of carbon that is nowadays used in nanotechnology.

Professor Smalley is known as the grandfather of nanotechnology.

Having heard a lecture on intelligent design, professor Smalley decided to examine evolution in depth. In an e-mail to Dr. Jerry Bergman, his widow Debbie Smalley Wainerdi wrote: “He said that if he conducted his research the way that they [i.e. those who did research on evolution] did, he would never be respected in the scientific community”.

According to professor Smalley, recent discoveries in genetics and cell biology had put an end to the credibility of Darwinian evolution. He thought that biological evolution was not even possible.

Later Smalley gave up skepticism and turned to Christianity. For a while he believed in theistic evolution but after examining the issue in more depth, he became convinced that God could not have used evolution. He was sure that Genesis was right and evolution was wrong.

During his final years, Smalley began to criticise evolution in public. He planned to challenge the scientific community but died of leukaemia before he could do so.