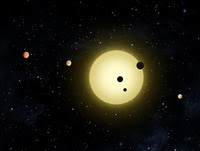 It does not get too cold on these recently discovered exoplanets. Image courtesy of NASA.

"We keep hearing it over and over again: Other planetary systems aren’t like our own," says Debra Fischer, an exoplanet researcher at Yale University. She suggests that the recent discovery of a six-planet system is “just incredible”.

NASA’s Kepler space telescope found a planetary system in the constellation Cygnus approximately 2000 light years from us. Five of the planets orbit their sun closer than Mercury ours and the sixth orbits it at roughly the distance of Venus.

The planets orbiting the star Kepler 11 are all more massive than Earth. Their size varies from that of Earth to Uranus. Three of them are huge gas giants that have atmospheres of hydrogen and helium.

Once again, we find that Earth is a very special planet. This should not come as a surprise since the Bible says that God created the earth to be habitable.