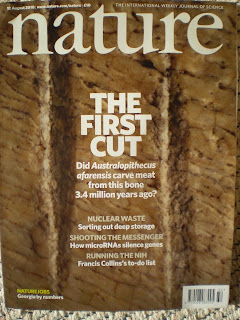 Nature recently advertised the marks of the assumed stone tools of Australopithecus on its cover.

Did Lucy use stone tools? Recently Nature published a letter that reported the discovery of bones in Ethiopia assumed to be approximately 3.4 million years old. Anthropologists think that they bear the marks of stone tools. They calculated the age of the bones from the volcanic ash in the region.

Shannon McPherron, Zeresenay Alemseged and colleagues believe that the marks in the bones are evidence of the earliest use of stone tools. They assume that Australopithecus afarensis used the tools 800, 000 years before H. habilis learnt to make such implements.

The researchers have not found any tools at or near the site where they discovered the bones so the debate has to do with the cause of the marks. No evolutionist will publicly admit that H. sapiens could have used the tools to carve up Australopithecus since they do not believe that modern man had evolved at the time.

For the same reason they still believe that Lucy left the Laetoli footprints.

The most logical solution to the dilemma would be to admit that Lucy could not have been capable of using stone tools and that faulty assumptions behind dating methods have led them astray.