The Noachian era – but only on Mars? 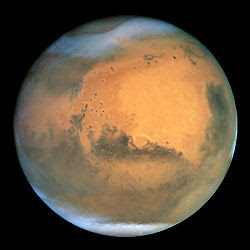 Was the red planet once blue? Image courtesy of NASA.

Recently, Science published a paper on the assumed watery past of Mars. It even mentioned the Noachian era that obviously caused the red planet to change its colour to blue.

In their paper, Richard Morris and colleagues acknowledge that the evidence for ” outcrops rich in carbonate minerals [on Mars]… has been sparse”.

”Using the Mars Exploration Rover Spirit, we have now identified outcrops rich in magnesium-iron carbonate (16 to 34 weight percent) in the Columbia Hills of Gusev crater. Its composition approximates the average composition of the carbonate globules in martian meteorite ALH 84001. The Gusev carbonate probably precipitated from carbonate-bearing solutions under hydrothermal conditions at near-neutral pH in association with volcanic activity during the Noachian era. ” (italics added)

For them, carbonate-rich outcrops suggest that Mars was once warmer and wetter than it is now.

For reasons that do not sound very scientific, some secular scientists are willing to accept the Noachian era – as long as it occurred on Mars four billion years ago and not on Earth 4,500 years ago.

However, the evidence points to a real global flood - on Earth.