The mother of all bats could probably echolocate like modern bats 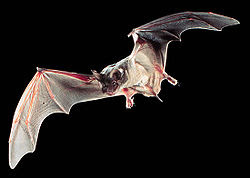 Bats have hardly changed their habits. Image courtesy of Wikipedia.

Last week, Nature published a study on bats that challenges current views of the ability of the earliest bats to use echolocation. Previously, researchers had assumed that the oldest bat Onychonycteris finneyi, dated at “52 million years", was unable to echolocate.

Nina Veselka and her colleagues examined 26 modern bat species using microcomputed tomography and compared them to the mother of all bats. They concluded that even Onychonycteris finneyi could probably echolocate since ”its stylohal bones may have articulated with its tympanic bones”, i.e. its bones in the throat were probably connected to its bone in the ear region just like in modern bats.

Once again we notice that many species tend to have very conservative habits. They remain unchanged for surprisingly long aeons.