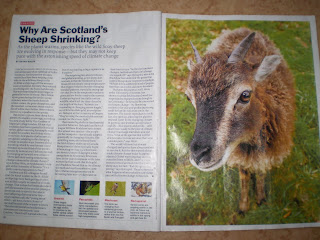 Time writes about the shrinking sheep of Scotland.

Today, the average wild Soay sheep of Scotland is five per cent smaller than its forefathers were 25 years ago. According to Time magazine this does not mean that ”evolution has been repealed in Scotland” but that climate change is making it possible for smaller, less fit sheep to survive the winter.

The Time article is based on a study that Tim Coulson of Imperial College London and his colleagues recently conducted. Arthur Wies, a biologist at the university of Toronto, assumes that this adaptation is a result of evolution that is related to climate change.

Although the article in Time associates shrinking sheep with Darwinian evolution, their changes are probably due to natural selection that can explain the survival of sheep but not the origin of sheep. Winters on the St. Kilda islands have become shorter and milder. There is more food than before and even the smaller and younger sheep are able to survive the winters of Northern Scotland and get descendants that are smaller than before.

Natural selection is often confused with evolution. However, the survival of small sheep in harsh climate does not propel Darwinian evolution. Only by increasing genetic information could a sheep evolve into something that is not a sheep. But now ”evolution” is going in the wrong direction, producing mini sheep that are basically less fit.

It seems that in Scotland they will have to get used to counting smaller sheep.