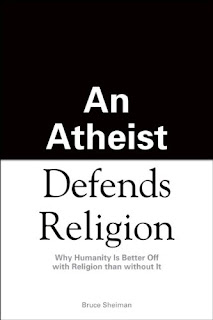 A new book by an atheist has a surprising message: religion is beneficial.

Religion is good for people. It gives us a reason for living and makes us happy. Religion is also beneficial for society as especially Christians have set up schools and hospitals and help the have-nots.

The idea is not new. Theologians and sociologists have known this for decades but now the thesis comes from a surprising source.

Bruce Sheiman, who regards himself as an atheist, reaches this conclusion in his fresh book An Atheist Defends Religion: Why Humanity Is Better Off with Religion than Without It.

Richard Dawkins, Christopher Hitchens and some other militant atheists have in recent years followed the example of T. H. Huxley and attacked religion viciously. Now, however, it seems that moderate atheists also want their voice to be heard.

I wonder what atheists will next defend? They might for instance show that the global flood of Noah’s days helps us to understand the birth of fossil graveyards and that the empty tomb speaks convincingly of the resurrection of Christ.

We should keep in mind that even C. S. Lewis was an atheist before he became one of the best-known defenders of Christianity. Those who earnestly seek the truth usually find it.