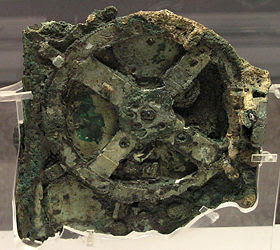 The Antikythera Mechanism. Image from Wikipedia

When I took my first course in computer science I learnt that Charles Babbage (1791-1871) invented the mechanical computer. But now it seems that the Greeks already made sophisticated calculators over 2000 years ago.

In the first century BC a Roman ship sank near the Greek island of Antikythera. Its cargo lay hidden at the bottom of the sea for two millennia until in 1901 a sponge diver found the wreck. Among the statues that were discovered was also a mysterious device. Believed to date from ca. 100 BC, the Antikythera Mechanism, as it is called, is the most sophisticated scientific instrument of the ancient Greek world that has survived to our time.

The Antikythera Mechanism consists of at least 30 gear wheels and pointers. Previous research on the device disclosed that it was a mechanical computer for calculating the movements of the sun, moon and probably also some planets. It could be used for predicting eclipses, for instance.

A recent letter in the journal Nature by British mathematician Tony Freeth and colleagues brings to light more uses for the device. They studied the mechanism and its Greek inscriptions with microfocus X-ray computed tomography. They found out that the mechanics were also used as a four-year calender for the timing of the Olympic Games.

Freeth suggests that the device might have been made by a follower of Archimedes (ca. 287 BC – 212 BC).

The prevailing evolutionary view of man has often blinded scientists into thinking that ancient men had to be very primitive. Each generation tends to think that their forefathers were less advanced than themselves. However, recent findings have indicated that this is not necessarily true. The Neanderthals, for instance, were more civilised than we once supposed. The same is true of the Greeks. When it comes to technology, they were centuries ahead of their times.