Giant Planet Around Tiny Star 'Should Not Exist' 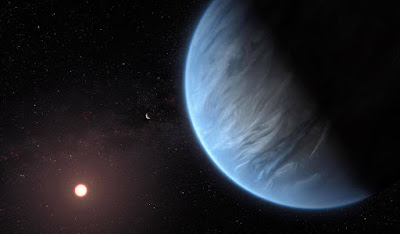 University of Bern, Fair use doctrine.


A planet that circles around a sun should not exists, say astronomers who reported on it in the journal Science. The planet, called GJ 3512b, orbits its Sun at 31 light years away from us.

It is a Jupiter-like world the most circles a M-type red dwarf, Oddball solar system throws planet formation theories into question. the most common type in our galaxy. the planet orbits its Sun closer that mercury our Sun. However, there it is also orbited by a planet that moves around it at a distance of 3.8 years or so, is the size of a half a Saturn.

Ssays Sid Perkins in Science, “For a solar system that contains such a small parent star, these large, gassy orbs probably didn’t gradually grow around rocky cores like those in our solar system, because that process would have been so slow that much of the gas now part of the planets would have instead escaped into interstellar space."

So the planet that should not exists, continues to exist – to the consternation of secular astronomers.

The Earth is a very unique planet, created to be lived by men.