Epigenetics: The Non-Darwinian Development of the Fruit Fly 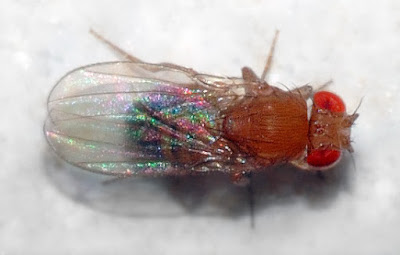 Epigenetics is a big hurdle for orthodox Darwinism, in which random mutations and natural selection are supposed to run the show.

But often they don’t.

According to research highlights article in Nature:

“Environmental factors can modify the activity of genes in adult organisms without changing the underlying DNA sequences, but if and how these ‘epigenetic’ changes are passed between generations is not well understood.

Nicola Iovino at the Max Planck Institute of Immunobiology and Epigenetics in Freiburg, Germany, and his colleagues investigated the inheritance of epigenetic modifications through proteins that DNA wraps around, known as histones.

They created fruit fly (Drosophila melanogaster) embryos lacking the enzyme Enhancer of zeste — one of a set of proteins that alters histone H3 by attaching methyl groups to create an epigenetic mark called H3K27me3.

Manipulated embryos showed similar levels of H3K27me3 at fertilization to those in unmanipulated ones at the same stage, confirming that both groups had inherited the modification from their mothers. But embryos lacking Enhancer of zeste could not propagate H3K27me3 during early cell divisions. They showed abnormal development and died before reaching adulthood. The authors suggest that inheriting H3K27me3 helps flies to regulate the timing and location of gene expression during early development.”

Darwin had next to nothing to do with this scenario. So, perhaps it’s high time to say good bye to his outdated thinking.