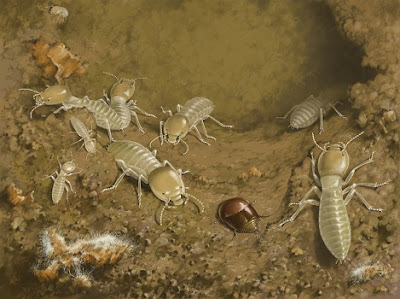 Symbiosis is not a modern invention. A paper published in the journal Current Biology re-writes the known history of symbiosis between beetles and termites:

Found in a mine in Burma (Myanmar), Cretotrichopsenius burmiticus are only 0.7 millimetres (0.03 inches) long and look like today’s rove beetles that live in symbiosis with termites.

This shows that there’s hardly anything new under the sun. Most insects trapped in amber look practically the same as today’s animals.

Beetles are living fossils that haven’t changed since the heydays of the dinosaurs.

New discoveries are pushing back the dates when animals lived. If this trend continues, we will sooner or later have all kinds of organisms living at the same time and Darwinian evolution will be in big trouble.