The Tasmanian Tiger Is an Enigma for Evolution 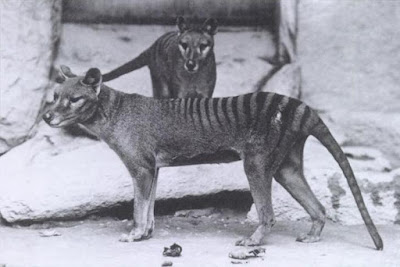 Those were the days, my friend. Image courtesy of Baker; E. J. Keller, public domain.

The last Tasmanian tiger or thylacine died in captivity in a zoo in Hobart, Tasmania, way back in 1936.

Or that is what we were told.

Now, with rumours of sightings as well as actual sightings of at least four dog-like mammals that could very well be Tasmanian tigers, some of these strange marsupials might still be alive in the wild.

The animals were spotted in northern Queensland at close range, at a distance of 6 metres or 20 feet, and they most probably were not dingoes.

Scientists at James Cook University are investigating whether the animals really are Tasmanian tigers.

For Darwinists, Tasmanian tigers are enigmas. Despite their name, they are not big cats. They look a bit like wolves or dingoes, but like kangaroos, koalas or Tasmanian devils, females carry their offspring in pouches.

The Darwinian explanation for the close resemblance between marsupials and placental mammals is convergent evolution, which really doesn’t explain anything.

They are not closely related, so they should not look alike.

Perhaps the best synonym for convergent evolution is Darwinian storytelling. Where there is no evidence, there always is a story, regardless of how unbelievable it might sound.