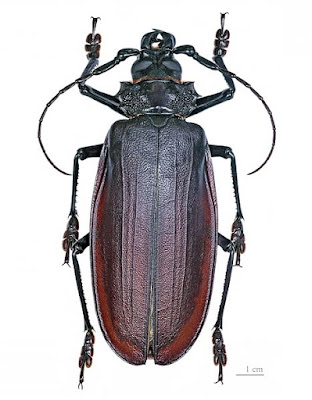 Beetles come in many shapes and sizes, but they have been beetles for a very long time. Image courtesy of Didier Descouens, Creative Commons (CC BY-SA 4.0).

Amber might soon become a source of cognitive dissonance for evolutionists. It often shows that Darwin was wrong about change.

Regardless of their assumed age, practically all insects trapped in amber look practically the same as today’s animals, whether they are spiders, wasps or ants.

This stasis is also seen in bird wings and flowers, regardless of whether they’re supposed to be 15 million years old or 100 million years.

New research adds yet another insect to the list:

“Named for Charles Darwin, the only known specimen of a newly discovered beetle, Darwinylus marcosi, died in a sticky gob of tree sap some 105 million years ago in what is now northern Spain. As it thrashed about before drowning, more than 100 clumped pollen grains were dislodged from its body and released into the resin. Five grains remained stuck to the beetle itself. Preserved with the beetle in the now-hard amber, the grains reveal that the beetle had been chewing a pollen meal with its jaw-like mouthparts just before it died.”

This might also apply to Darwinylus marcosi, the recently discovered beetle, although some plants can be pollinated by a variety of pollinators.

Once again, research shows that animals haven’t changed their habits for aeons. This is exactly what we would expect, as Genesis describes real history, including the account of creation, with animals producing after their kinds.