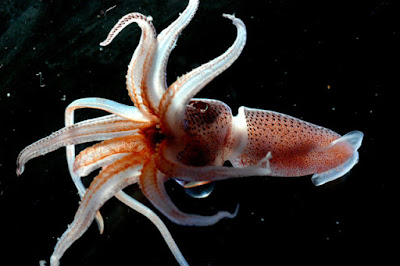 The cock-eyed squid looks just like a squid, but a closer look will show a remarkable difference: it has one big bulging eye that points upward and a smaller eye with which it sees what’s happening underneath it.

New research published in the journal Philosophical Transactions of the Royal Society B examines videos taken by remotely operated submarines.

“The findings provide the first behavioural evidence that the two eyes are adapted to look in different directions. The large one points upwards to spot prey silhouetted against the sky. The smaller one points downwards to spot bioluminescent organisms against the darkness below.”

Kate Thomas at Duke University in North Carolina and her colleagues discovered that the eyes are of the optimal size and shape:

While they invoke evolution as a potential answer to this dilemma, it seems more logical to assume that the eyes are designed this way on purpose.

The cock-eyed squid also has a Genesis connection. It shows that there is great variety within the squid kind – just as there is within the other kinds – but they still remain squids.

It joins hybrids such as wholphins, ligers. zonkeys, geeps and grolars in celebrating the Genesis after its kind principle.