Clever Begonias: Blue Leaves Help Them Get More Energy from the Sun 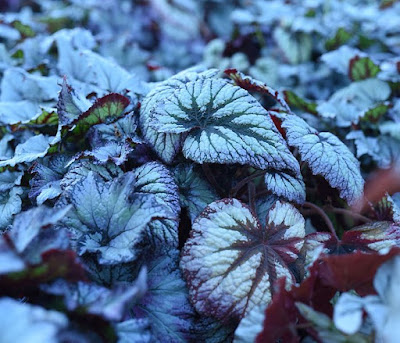 For Charles Darwin, the origin of flowering plants was an abominable mystery. Why would the blind watchmaker produce so much beauty?

And they are not only beautiful but they are also amazingly smart and know how to communicate and co-operate with other plants.

Scientists used to think that this conversion happened more or less passively. However, new research published in the journal Nature Plants suggests that plants play a more active role in it.

A brief article in Science explains that British scientists have

“discovered a species of shade-dwelling begonia called Begonia pavonina … that arranges light absorbing components in its leaves to boost their light absorption.”

While “typical chloroplasts contain membrane-bound compartments called thylakoids that stack atop one another in a somewhat haphazard arrangement,” this flowering plant did it in a more sophisticated way:

“In B. pavonina, however, this stacking is far more regular, creating what are known as photonic crystals. These crystalline arrays strongly reflect blue light, giving the leaves an iridescent glow. But more importantly, they concentrate the more abundant green and red wavelengths of light on the leaves’ energy absorbing apparatus. The upshot is that B. pavonina’s leaves soak up as much as 10% more energy than other low-lying forest dwellers. That may not seem like much, but under the thick canopies of Malaysian forests where B. pavonina lives, that extra energy gives the plant the juice it needs to edge out its competitors.”

The take away message is that these flowers are far too clever to be the products of an entirely blind watchmaker. They are beautiful, they are intelligent, and they are designed.