Cambrian Animal ”Did a Fair Amount of Thinking,” Science Suggests 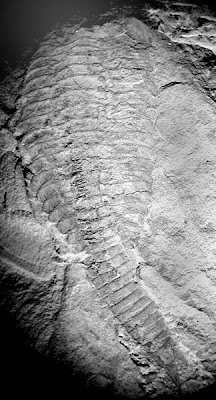 Cambrian animals were supposed to be relatively unsophisticated. However, recent discoveries show that this is simply not true.

The article suggests that the animal “presumably did a fair amount of thinking”:

“It was both modern and unsophisticated. A simple, tubelike heart was buried in the creature’s belly—or thorax—and shot single blood vessels into the 20 or so segments of its primitive body. In contrast, x-ray scans of the specimen revealed profoundly intricate channels in the head and neck. The brain was well supplied with looping blood vessels, which extended branches into the arthropod’s alienlike eyestalks and antennae and rivaled the complexity of today’s crustaceans. From this Gordian architecture, the researchers can now speculate about the critter’s lifestyle. Its brain required abundant oxygen, so it presumably did a fair amount of thinking. The ancient arthropod could likely peer around its murky marine environment, taking cues from a relatively advanced visual and sensory system, the researchers say.” (Bold added)

In contrast to what early Darwinists thought, soft body parts can be fossilised in exceptional circumstances (such as during Noah’s Flood).

The original Nature Communications paper by Xiaoya Ma and colleagues states that the fossil was “exceptionally preserved” and that this Cambrian arthropod reveals complexity.

For Charles Darwin, the Cambrian Explosion was a huge problem. It is still an enormous dilemma for his latter day followers. (Read more here, here and here.)