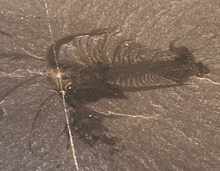 The Cambrian animals were by no means simple. A fossil of Marrella splendens (Marrellomorpha). Image courtesy of Wikipedia Commons.

Hardly a day goes by without news of great difficulties for Darwinian evolution. Science Daily reports that the Cambrian Explosion, which used to be a dilemma for Charles Darwin, is still a real headache for evolutionists.

Matthew Wills, an evolutionary biologist at the University of Bath, acknowledges:

“The fossils from the Cambrian period can cause a real headache for evolutionary biologists. Instinct tells us to expect simple organisms evolving over time to become increasingly more complex. However during the Cambrian period there was an apparent explosion of different major groups of animals, all appearing simultaneously.”

This is definitely not that what we would expect of evolution.