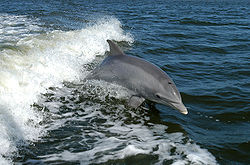 Dolphins share a trait with bats that is difficult to explain by Darwinian evolution. Image courtesy of NASA.

Convergent evolution has long been used as a method for explaining away some of the difficulties that evolutionary thinking encounters in a world that is more amazing than Charles Darwin ever thought.

A good illustration of this is a new paper published in the journal Nature, which examines echolocation in bats and dolphins.

Echolocation is the technique that inspired engineers to build the sonars that enable submarines to detect other vessels or objects. Bats and dolphins use it to “listen to their own clicks and calls echoing back from obstacles or prey.”

As reported in a Nature news article, the researchers’ aim was to study “convergent evolution in 2,326 genes shared by 22 mammals, including six bats and the bottlenose dolphin.”

“Different organisms often independently evolve similar observable traits such as anatomical or functional features, but the genetic changes underpinning such 'convergent evolution' are usually different. The new study, published today in Nature, hints that evolution may be finding the same genetic solutions to a problem more often than previously thought.”

This is somewhat problematic, as the Darwinian watchmaker is supposed to be blind and unable to look ahead. It does not seek solutions to problems. So the study does certainly not support evolution.

Evolution is merely assumed. There is a much better explanation: bats and dolphins were designed that way.