”Humans Are a Plague” –Evolutionist David Attenborough’s View of Man 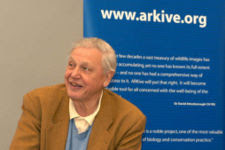 The evolutionist’s view of man is not very lofty. If he (or she) believes that humans evolved from pond scum via the fish and amphibian stage into an ape-like creature before beginning to invent a family tree for themselves, the result is bound to be hopeless.

Sir David Attenborough, famous for his documentaries, put this recently into words: ”Humans are a plague.”

In contrast, according to Genesis humans are exceedingly valuable, as we are created in God’s image. And according to the Gospels, He has paid the ultimate price for us.