God And the Loch Ness Monster 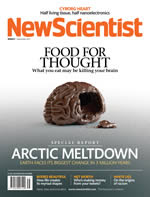 New Scientist has a brief feedback item on God and the Loch Ness monster.


“WHAT can it be like inside the heads of creationists? They want to believe that their deity made all the species at once and kept them that way, yet Earth is teeming with fossils of extinct species. So what gives?” New Scientist asks.

“If the deity's a trickster, the answer is easy: she, he or it put the fossils there to cause interminable arguments.”

The main problem with this approach is poor scholarship. The Genesis kinds cannot be equated with our species. The dog kind, for instance, includes wolves, jackals, foxes and dingoes in addition to dogs.

A further problem with New Scientist story is that the Bible does not say that God “kept [animals] that way” [i.e. prevented them from changing].

However, both true observable science and the Bible agree that one kind of animal, say a cat, does not turn into another kind, such as a dog.