Migratory Birds Cause Problems for the Genesis ”Local Flood” Hypothesis 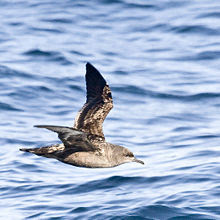 The Sooty Shearwater's (Puffinus griseus) long migration suggests that Noah’s Flood could not have been local. Image courtesy of Mike Baird, Flikr/Wikipedia.

Some Christians and especially sceptics think that the Flood of Noah’s days was a local inundation in either Mesopotamia or the Black Sea area.

However, this view that many progressive creationists and theistic evolutionists promote has several serious problems.

The ark would have been unnecessary in a local flood. According to Genesis, Noah also had to take birds on the ark:

Even today, many migratory birds fly thousands of kilometres from one continent to another twice a year. For instance, the Sooty Shearwater (Puffinus griseus) migrates from the Falkland Islands, Tierra del Fuego or New Zealand to Norway, a distance of some 14,000 kilometres (9,000 miles). And then the same way back.

The only reason why Noah had to take birds on the ark was that the Flood was global.

In a world entirely covered by water, the only shelter for migratory birds was inside the ark.
Lähettänyt bwanajoe klo 10:56