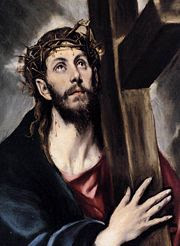 Jesus’ way went to the cross. Nowadays many Christians are being persecuted for their faith. El Greco (1580): Christ Carrying His Cross. Image courtesy of Wikipedia.

Persecutions are nothing new to Christians. Jesus predicted them and according to early Christian tradition all the apostles except John were martyred for their faith.

In many Muslim countries, conversion to Christianity is punishable by death. All too few people in the West know or are willing to speak about this glaring breach of human rights.

Next Sunday (November 21st) is an International Day of Prayer for the Persecuted Church. There are surprisingly many persecuted Christians in the world, approximately 200 million.