New Discovery: Evidence For the Joseph of the Old Testament in Ancient Egyptian Coins? 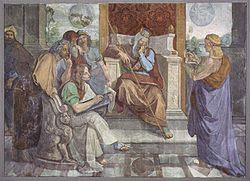 Egyptian archaeologists say they have found evidence for the historicity of the Joseph described in the Book of Genesis. Recently, a research group led by Dr. Sa'id Muhammad Thabet took a closer look at the collections of the Egyptian Museum of Archaeology. They found 500 coins from the time of the Pharaohs.

Previously, archaeologists had assumed that these items were amulets. They had put them away in boxes. However, a more in-depth investigation revealed that they were coins.

Some historians were reluctant to believe that coins were used in Egypt during the era of the Pharaohs. They supposed that at the time people ”were unfamiliar with coins and conducted their trade through barter”, as a recently released report puts it. However, the new discovery suggests that they were mistaken.

In some of the coins, the name Joseph was written in hieroglyphics. It appears in two forms, one of which is Saba Sabani or Zaphenath-Paneah (Genesis 41:45), the Egyptian name that Pharaoh gave him.

The archaeologists also found a coin describing a cow. They associated this with Pharaoh’s dream of seven fat and seven gaunt cows. Having interpreted the dream, Joseph, a Hebrew slave, became the chief minister of Egypt in charge of the ruler’s food program.

Recently, the Egyptian daily Al-Ahram reported on the find. The Middle East Media Research Institute (MEMRI) published an English version of the text.

The coins are evidence of the historical reliability of the Old Testament. For a long time, skeptics have claimed that Joseph was not a real historical person. Perhaps they ought to take a more skeptical look at their skepticism.

During the past few years, scholars have found evidence for the historicity of several Old Testament characters, such as Nebo-Sarsekim, a Babylonian officer mentioned in Jeremiah 39:3, and Gedaliah, son of Pashhur , one of king Zedekiah’s ministers (Jeremiah 38:1).