Setback for Alien Life Hopefuls: No Signs of Water on Mars 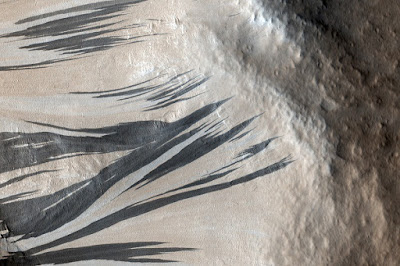 Where’s the water? Image courtesy of NASA/JPL-Caltech/University of Arizona

Just over a century ago, it was customary to see signs of an alien civilisation on the red planet. Italian astronomer Giovanni Schiaparelli (1835–1910) thought he saw canals on Mars.

Some people still think that there’s at least an inkling of truth in this.

Furthermore, Many people think that the red planet was once blue, sloshing with water.

Time magazine, for instance, has claimed that the Sun helped murder Mars.

And researchers have continued to speculate that liquid water might still be sloshing down the slopes of the red planet.

Now, however, Colin Dundas of the US Geological Survey and colleagues analysed satellite images.

Their research suggests that the assumed signs of running water on Mars dunes are probably just dry sand, as an article in New Scientist put it.