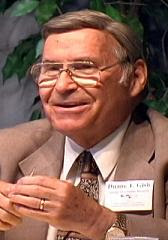 Dr. Duane T. Gish, one of the pioneers of the modern creationist movement, died earlier this week at the age of 92.

Dr. Gish earned a PhD in biochemistry from the University of California - Berkeley. He served as Vice-President of the Institute for Creation Research (ICR). He is known for 300 debates with evolutionists. His success prompted evolutionists to cease debating creationists.

Dr. Gish was not a big man physically, but intellectually and inspirationally he was a giant.