Why Is Evolution Still Used to Explain Anything We Don’t Know? 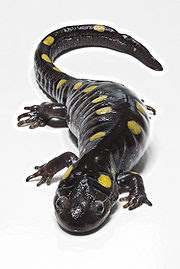 Salamanders have recently been a source of Darwinian speculation. Image courtesy of Wikipedia.

Science publications tend to use the word “evolution” when the author does not know how something came about. Two recent examples:

“The ability to drop the tail has evolved in several groups of geckos, other lizards, and salamanders.”

”Plants cannot avoid pathogens by fleeing, so they have evolved mechanisms to resist attack … [they] have evolved disease resistance (R) genes.”

The former quote is from the webpages of New Scientist and the latter from the journal Nature.

What do they really tell us about tail-dropping animals and plants such as Arabidopsis? They suggest that both animals and plants have been designed to cope in a world that unlike the very good creation in Genesis is no longer perfect.

All the rest is pure speculation.

Do it Again: Round-up of Regenerating Animals. New Scientist 13 July 2011.