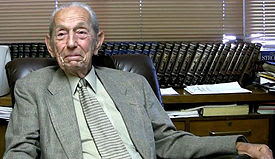 Harold Camping is a well-known radio broadcaster and author. He predicts that the world will end very soon. Image courtesy of Wikipedia.


There has been no shortage of end-of-the-world predictions lately. Many have suggested that December 21st, 2012 is the most likely date for the grand finale.

Harold Camping (born 1921) is an author and media personality who specialises in end-time events. He suggests an even faster timetable, predicting that Jesus will return in just nine days’ time or on May 21st.

This kind of speculation is nothing new. Christians and cults in particular have often predicted the date for Jesus’ return. Jehovah’s Witnesses for instance taught that Jesus would return in 1914. However, the events of that year do not fulfil all the characteristics of the Second Coming.

Our world does not look like the Millennium during which the lion eats grass like the sheep and wars would only be a memory.

Mr. Camping says that one day in the Bible corresponds to a thousand years in human history. He has dated the Flood at 4990 B.C. or over 2,500 years earlier than archbishop James Ussher’s traditional computation. According to Camping, May 21st will mark the 7,000th year since the beginning of the Flood.

He is right in that Peter did speak about the Flood of Noah’s days and a thousand years in the same context:

However, the apostle did not mean that a day is a thousand years. Instead, he emphasised that God would fulfil His promise – in due time:

“The Lord is not slow in keeping his promise, as some understand slowness. Instead he is patient with you, not wanting anyone to perish, but everyone to come to repentance. “

Nothing in Peter’s teaching suggests that we can compute Jesus’ return from the year of the Flood.

Mr. Camping has computed that God created the world in the year 11,013 B.C. I do not know of any theologian who would share this view. Ussher for instance suggested the year 4004 B.C. but even his dates are not inspired.

A few decades ago Mr. Camping predicted that Jesus would return in 1994.

Although we might be tempted to compute a plausible date for the Second Coming, it is good to keep in mind that “the day of the Lord will come like a thief” (2 Peter 3:10, NIV). Our primary task is not to compute dates but to fulfil the Great Commission of taking the gospel to all nations.

When the apostles asked the risen Christ about future events, He said:

“It is not for you to know the times or dates the Father has set by his own authority. But you will receive power when the Holy Spirit comes on you; and you will be my witnesses in Jerusalem, and in all Judea and Samaria, and to the ends of the earth.” (Acts 1:7-8).

Camping, Harold. JUDGMENT DAY. THE END OF THE WORLD IS ALMOST HERE! HOLY GOD WILL BRING JUDGMENT DAY ON MAY 21, 2011.
Lähettänyt bwanajoe klo 10:47