Old speculations re-emerge: The Black Sea Flood as the inspiration behind the description of the Noachian Flood? 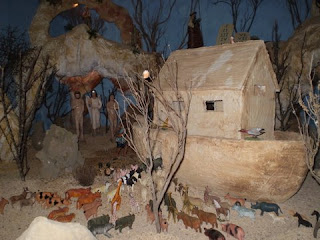 Noah’s ark was considerably larger than this model built by Spanish artisans in Gran Canaria. You can see an image of what the ark probably looked like here.

Recently, Ulrike Guérin and Katrin Köller brought up the local Black Sea flood as a potential explanation for the Noachian flood in an article on underwater treasures in UNESCO’s newsletter A World of Science.

According to Guérin and Köller, 7,500 years ago the surface of the Black Sea was a hundred metres lower than that of the Bosphorus. As the climate became warmer, glaciers melted, raising the sea level of the Mediterranean until its waters broke the natural dam at the Bosphorus and water rushed through.

They conclude this from the traces of a submerged coastline lying 17 metres below the surface of the Black Sea.

The hypothesis that Guérin and Köller propose is not new. Roughly ten years ago, National Geographic sponsored research that aimed at establishing the connection between the post-ice age Black Sea flood and the cataclysm of Noah’s day. The expedition was led by Robert Ballard, who discovered the wreck of the Titanic.

Dr. Tas Walker assessed these speculations in 2000. He showed that no details of the local flood scenario corresponded with what we know of the global cataclysm of Noah’s time.

The flood of Noah’s day was an unique global flood that destroyed all people and land animals outside the ark.

The Black Sea flood was a local catastrophe that occurred at the close of the ice age. Scientists who have dated the marks it left behind have failed to take into account the effect of the global flood that would have changed the 14C/12C relationship of the atmosphere as great amounts of vegetation remained submerged. Consequently, the carbon-14 dates for this and other catastrophes are too old.